At some point in ancient technology history, someone realized they needed to isolate a control signal. By “isolate” we mean that no common electrical signal path would exist between the control signal and the controlled device. Another term for this is galvanic isolation.

Before 5V, 3.3V, and 1.8V logic, this isolation was usually used in industrial control applications. “Ground” or circuit common in one piece of equipment could easily be at a significantly different potential than ground in an adjacent piece of equipment (and this is still an issue). Control signals could be passed from subsystem to subsystem via relays, making the circuit common issue moot. Also in use: an early, simpler form of the optocoupler — a small light-tight module with an incandescent or neon lamp and a cadmium sulfide (CdS) photo cell mounted side-by-side.

Crude, but effective. And, of course, the predecessor to the silicon based opto-isolator IC. The incandescent and neon lamp version are useful in applications where the controlling voltage is in the range of 12V to several hundred volts, AC or DC. These optocouplers were not useful for conveying rapidly changing signal information, but at the time, they worked just fine. 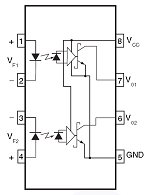 Once the need for passing fast-changing signals came to the fore, the silicon-based optocoupler really began to shine (pun intended). These use an LED and a phototransistor or a photodiode plus amplifier, so they could be pretty speedy. And it was easy to put multiple devices in one package — handy for moving lots of digital signals to and fro.

Now we are starting to see a new type of signal coupling device. It does not use light — no LEDs and phototransistors. Instead, the coupling is done magnetically. The device shown below is the Analog Devices ADuM144x series. 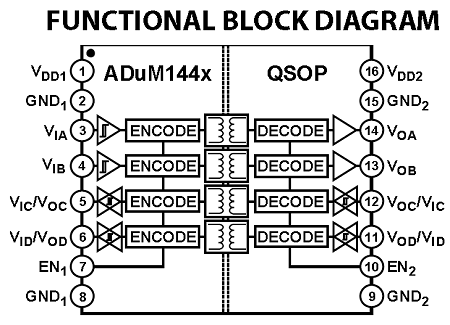 Again, putting multiple channels in one package is common. Better yet, this one has bidirectional capability on two of the four channels, useful in some data-com applications. And these devices can pass data about as fast as or faster than the opto devices. Isolation looks quite good and current draw is better than the LED devices — plus these can easily operate at lower supply voltages.

These nice features come at a price, however. By which I mean that the price you pay for such features is the increased price compared to a 4N25. Note also that the ADI parts do have some amount of susceptibility to external magnetic fields. A closer look at the data sheet (cited above) will shed some light (so to speak) on the degree of susceptibility.

Which methods of isolated coupling techniques have you used? What works well and what problems have you run into?

This site uses Akismet to reduce spam. Learn how your comment data is processed.

Sorry, we could not verify that email address.

Please confirm the information below before signing in.

Thank You for Registering

We have sent a confirmation email to {* emailAddressData *}. Please check your email and click on the link to verify your email address.

We'll send you a link to create a new password.

We've sent an email with instructions to create a new password. Your existing password has not been changed.

Sorry, we could not verify that email address. Enter your email below, and we'll send you another email.

Thank you for verifiying your email address.

We didn't recognize that password reset code. Enter your email below, and we'll send you another email.

We've sent you an email with instructions to create a new password. Your existing password has not been changed.